Child Abuse – Mandated Reporter Training – NEW!
Assembly Bill 506 (AB506) went into effect January 1st, 2022. It requires anyone who regularly works with children complete this training. Your certificate can be uploaded to your GotSport dashboard. Please visit this link to complete this training: https://mandatedreporterca.com/training/volunteers

Live Scan – NEW!
Also required under AB 506 is a current Live Scan for each regular volunteer. Location and promo code details to come.

Safe Sport
Please click on Safe Sport in your GotSport Dashboard to start the SafeSport training courses. If you are having trouble finding the link, please click the following link to access your SafeSport account. https://safesporttrained.org/#/public-dashboard

US Soccer Coaching License
Please click the following link to access the US Soccer Coaches Education page to get started on your required licensing.
https://learning.ussoccer.com/coach

This is merely a form to be reviewed and submitted and can be done directly from your GotSport Dashboard.

PYSL BLAST SC recognizes the time, effort and dedication that our volunteer coaches provide to the league, players and parents. Even though we are a volunteer-coached organization we believe it vitally important that our coaches are evaluated, appropriately assigned to teams and that they abide by a code of conduct that reflects professionalism in everything we do.

Our goal at Blast is to provide the best soccer experience possible to the players, their families and the coaches. Coaches will be selected and assigned by the Blast Committee, based on the needs of available Blast teams as well the coach’s preferred age and competitive level. Coaches will be evaluated and selected based on the following characteristics.

*Please review the PYSL BLAST SC Coaches Code of Conduct below, sign and return to the Director of Coaching.

Coaches are responsible for their sideline and all actions thereon. Coaches are expected to coach their teams in a positive and respectful manner. Referees are instructed to discipline any coach for irresponsible behavior if the coach, player, parent or spectator uses derogatory words or actions aimed at their players, the opposing team’s players, coach, sideline or any of the referees.

Penalties for violations are as follows:

2 – Right Fullback: When on defense, mark opposition wingers, stay goal side, don’t dive into to tackles, and compress the field. On attack, be a support or square option, keep the team balanced and in “shape”, run the whole channel, take players on 1v1, cross the ball, shoot on goal.

3 – Left Fullback: When on defense, mark opposition wingers, stay goal side, don’t dive into to tackles, and compress the field. On attack, be a support or square option, keep the team balanced and in “shape”, run the whole channel, take players on 1v1, cross the ball, shoot on goal.

4 –  Right Center Back: Also known as the central defender, center fullback, this position plays in the middle of the rear defensive line. A 4-4-2 formation will have two center backs, which will hang back to protect the goal.

7 – Right Midfielder/Winger: Also known as wingers or outside midfielders, these players will stay wide, helping pull the opponent’s defense to the outside to create space for their offensive line. They should have strong 1v1 skills as they’ll have to get around the other team’s left and right fullbacks and/or wingbacks. These players most likely won’t have the ball much during a game but will instead look for ways to transition the ball forward via crosses to offensive teammates or by taking shots on goal themselves. They must hustle and have plenty of stamina to keep up with gameplay.

8 – Central/Box-to-Box Midfielder: Often considered the most hardworking role, this player has to be ready for action and can play both defensively and offensively, depending on where the ball is. They are responsible for distributing the ball to other players, so it’s vital that they have exceptional ball handling and passing skills. When on the attack, they often take long shots on goal to help the offense. To fit a team’s strategy, they will sometimes line up with the 6 in a more defensive position or with the 10 in a more offensive formation.

9 – Striker: This player positions themselves nearest to the other team’s goal, in front of the center back. A striker’s primary role is to score. Their teammates will try to pass to them often and there is constant pressure from the other team’s defense, so they should be fast enough to outrun defenders and possess quick footwork and precise ball handling to be most effective. When the opposition has the ball, strikers should press the ball to increase the defender’s chances of making a mistake.

10 – Attacking Midfielder/Playmaker: The attacking midfielder sits between the midfield and the offensive line. They must know how to score goals and dribble well to avoid the opponent’s defenders. They should attack the ball when the other team is in possession and not hang back like other positions on the field. This position is often seen as the conductor in offensive plays, directing the ball and creating scoring opportunities. They are the playmakers.

11 – Left Midfielder/Wingers: Same Role as 7 except on the Left side.

Juggling: Have your players juggle for 5 minutes or more every practice. You can choose which juggles you want them to do, like feet only, knees only, or “around the world” (rt foot, rt knee, rt shoulder, head, lt shoulder, lt foot) It develops “touch” or coordination with the ball, focus and a sense of accomplishment as they become more proficient at it.

Rondo: Rondos are one of the best games/drills you can have a team do. It develops many skills and helps the kids learn different aspects of the game. Concepts include: moving to receive the ball, communicating, first touch, passing, spacing and creativity.

Setup – Several players in a circle approximately 6’ apart and 1-2 players in the middle. It’s basically a game of keep away but excellent for developing players ability to make fast decisions and play faster as a team. Focus on playing to the open player, receiving across your body for a fast two-touch pass, and try to split the defenders.

Options: You can change the number of passers and defenders, shrink the circle size to play in tight space, expand it for longer passing, allow only one-touch or two-touch passing, remove the defender for fast no-pressure passing, etc. 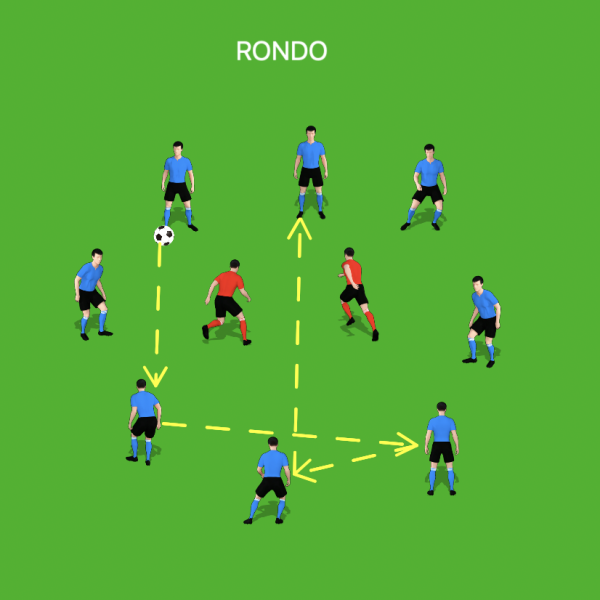 Rules of “Blob” games: Always start by asking “what are the four rules of Blob Games?”

Blob Tag: Set up a grid with four cones roughly 15’x15’, you can adjust depending on numbers.

The players run around in the grid until the coach says, “Sam is it.” Sam tags another player. They hold hands and become a two-person “Blob”. Then they use game calls to track down the next player. Calls such as “Slide Right”, “Drop Left”, “Squeeze”, or “Press”. Once the next player is tagged, they become a Blob of three. Once a fourth person is tagged they split into two separate two-person blobs. Last player to be untagged wins! 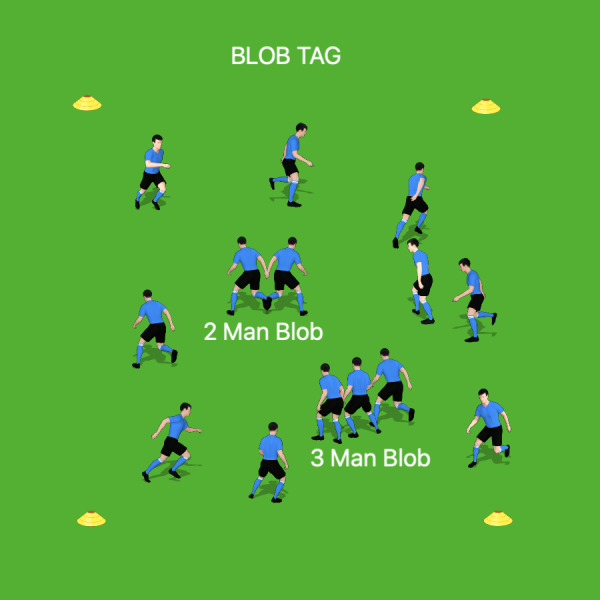 Blob Dribble: In this game the ”Blob” is all the players in the grid. Each player dribbles a ball around the grid as the coach calls out a type of dribble such as, Right Feet Only, Inside Feet Only, Outside Feet & Laces, Sole Rolls, Free Dribble etc. The goal is to do the correct dribble without bumping into any other player or ball and following the four rules of Blob Games.

Variation 1. The coach calls the dribble type and plays in one ball. Each player then can touch it once using that dribble and then the next player and so on. How many consecutive touches can we get without losing the ball or making a bad touch? Play three one-minute rounds.

Variation 2. Have all players dribble around the grid, each with a ball. Then call out “Jamie is it.” Jamie then plays her ball out of the grid and steals another player’s ball. That player in turn must steal someone else’s ball and so on. You can’t steal the ball back from the player that just stole your ball. You can add more “it” players to make it more challenging. 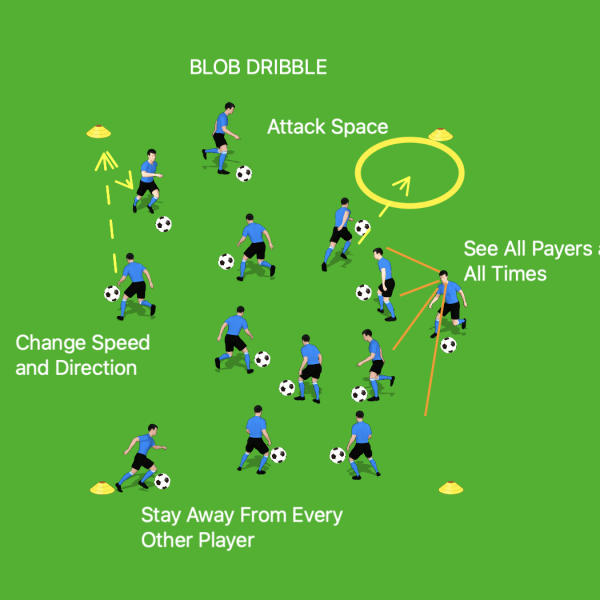 Dribble Gates: Set up many gates (two cones) in a grid. Partners take turns dribbling through the gates while the other partner counts the gates for them. The coach calls out a different dribble for each 1 minute round. The teams count up their completed gates. Focus on beating their own numbers and highlight improvements. 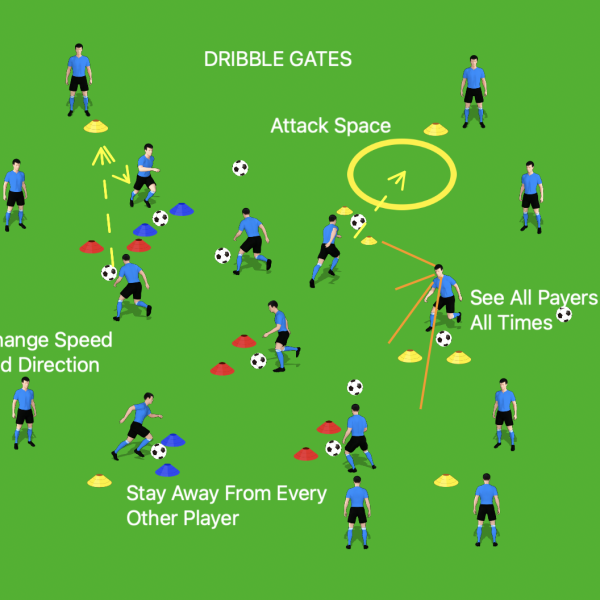 There are many types of 1v1 games and it just depends what you’re trying to work on. This game is particularly good for developing first touch, making fast decisions, dribbling with speed and defending without diving for the ball. Set up as shown below. The Blue team is the only one to score for one round (each player goes through three times). Then have the teams You can also make this a tag game by simply removing the ball. Then you have a tagger and a runner. Runner scores by running through either gate without being tagged. 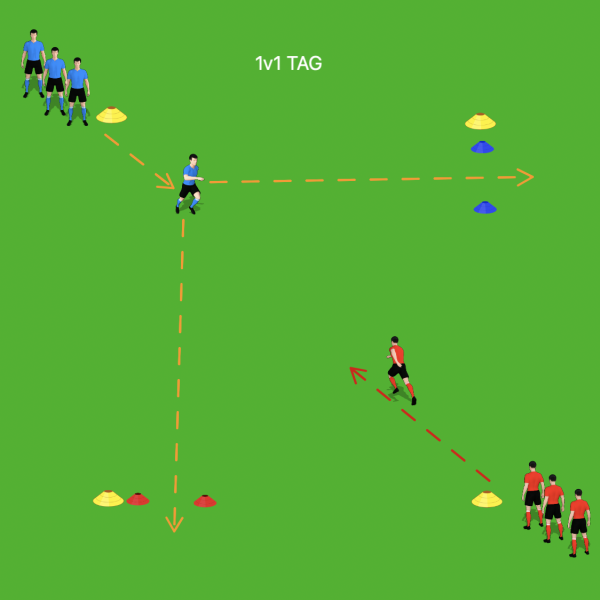 The coach alternates playing a fast pass to each line. The team with the ball tries to score on one of their two goals. Every player goes through the line 2-3 times to complete one round. Have the players switch places in line each round for different matchups. Then have them switch lines for a different starting position. Add advantage by allowing a third player to come in once their teammate plays back to them. Then you have a 3v2. If the other team wins possession, they can also play another player in for a 3v3. 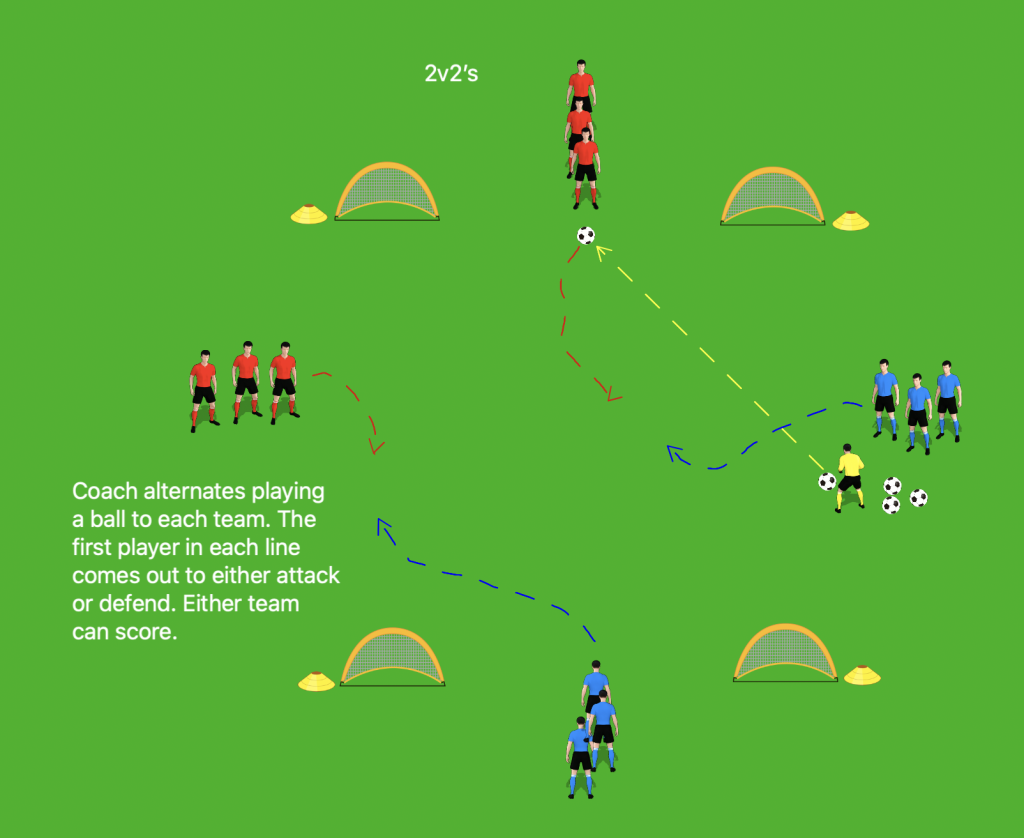 You start with two opposing players in each grid with a neutral bumper at each end. The bumpers are on whichever team possesses the ball. Points are awarded to a team if they can get the ball from one bumper to the other without losing possession. A point is awarded to the last team in possession if one bumper can connect to the other bumper. 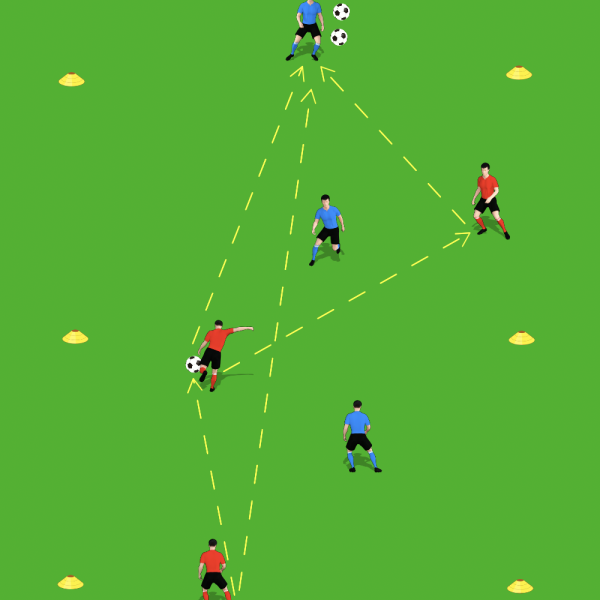 5v4, 4v2, 7v5, etc. Have one team be larger than the other to give an advantage to either the offense or defense. You can play with one goal, two goals, or several smaller goals. You can have one side just possess or work on building out of the back. You can focus on having your attacking players work on finishing and have your defensive players possessing or playing it up to you or small goals. 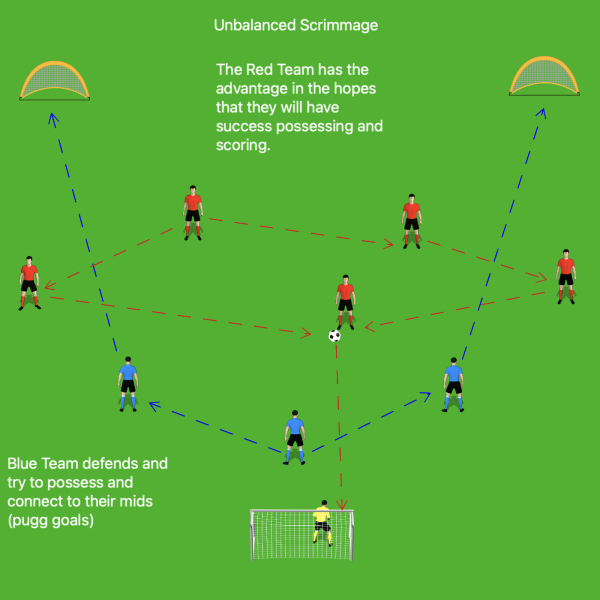 IFAB Laws of the Game App